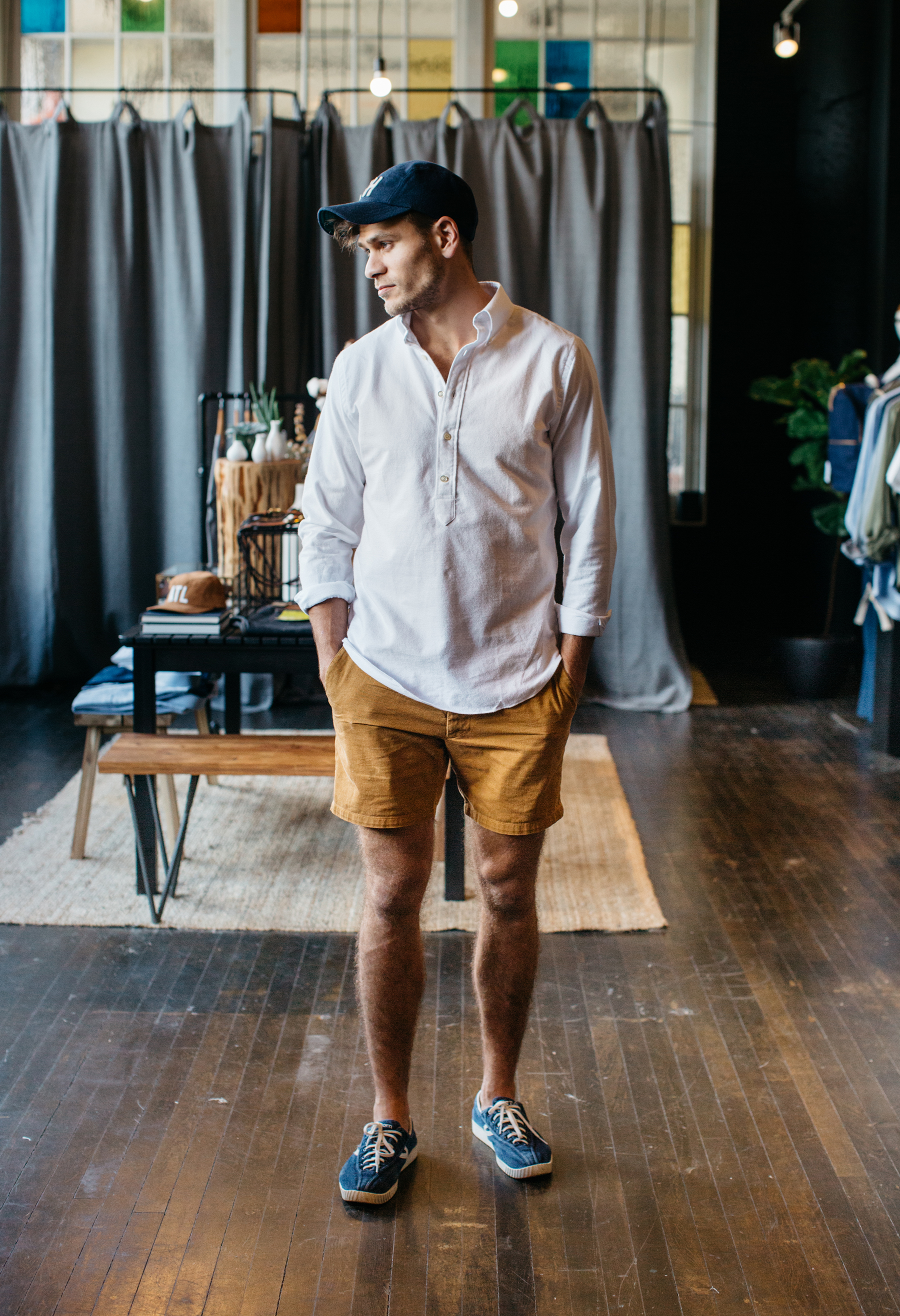 How Elk Head came to be:
Elk Head was inspired by the outdoors, but refined in the South, and was the product of my passion for quality menswear.

Spot you most frequent in PCM:
Spiller Park.

Now would ya look at that:
Meet Garrett Hilgendorf, Founder of Elk Head in Ponce City Market. 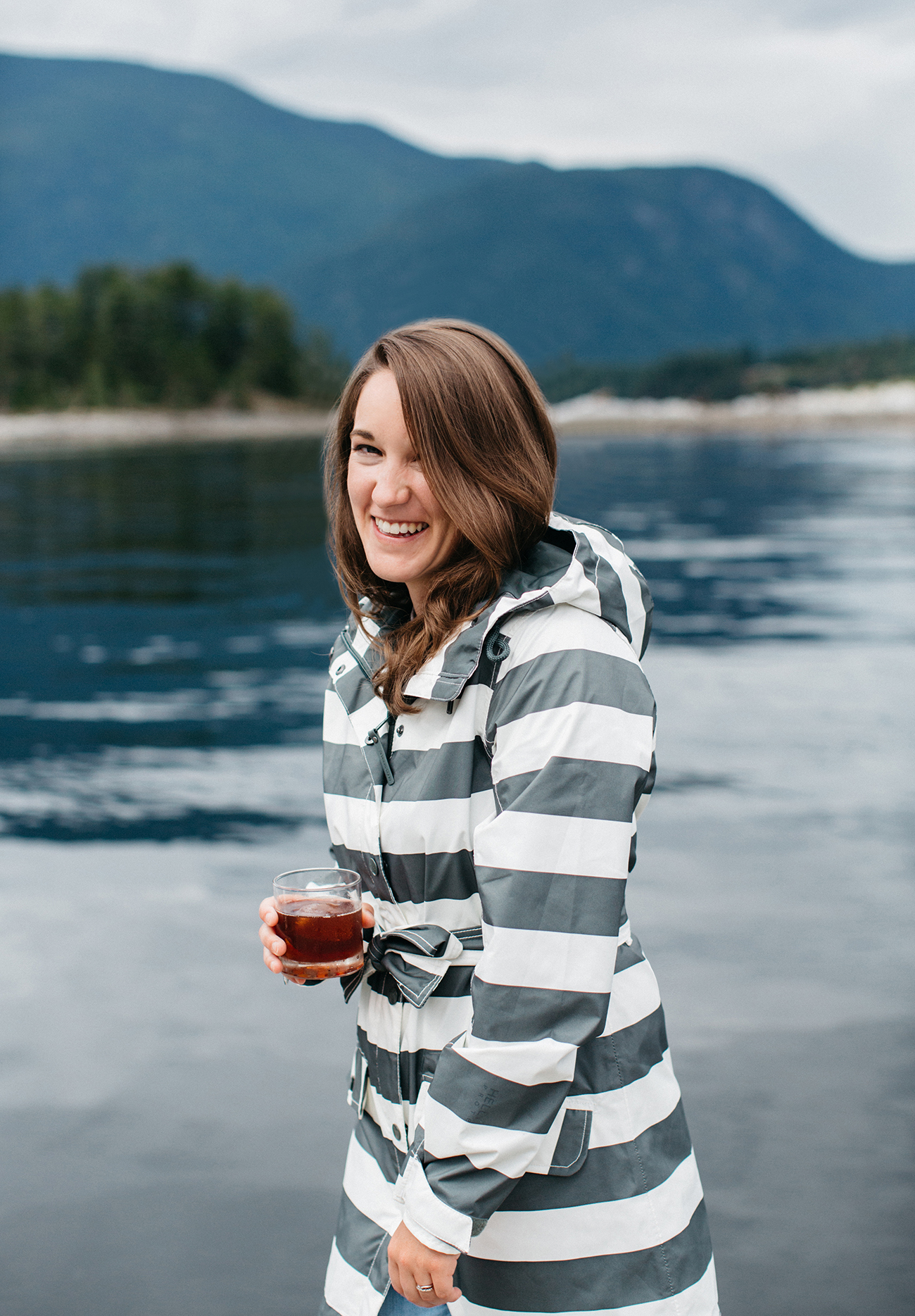 On our last trip out West this summer, we ventured North to British Columbia for Mark’s cousin’s wedding at Sonora Resort. This was our first visit to B.C. and the resort is without a doubt one of the most beautiful and impressive ones we’ve ever stayed. It can only be accessed by boat or sea plane making you feel a little bit like a movie star. We’re missing the fun, the food, the foggy, cool weather and the seals. Mark snapped this photo on our last afternoon; I was laughing to keep from crying about our trip coming to an end. 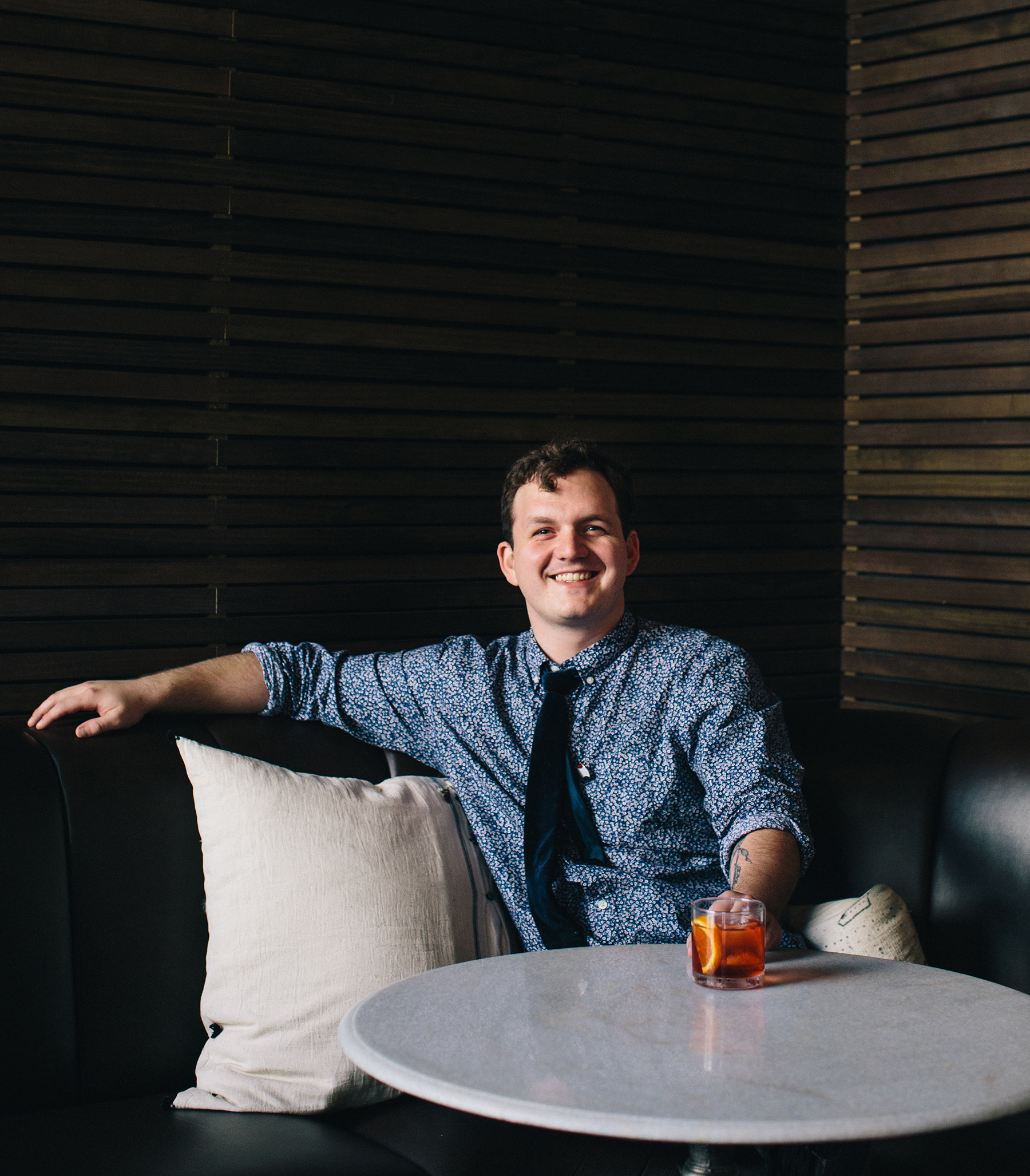 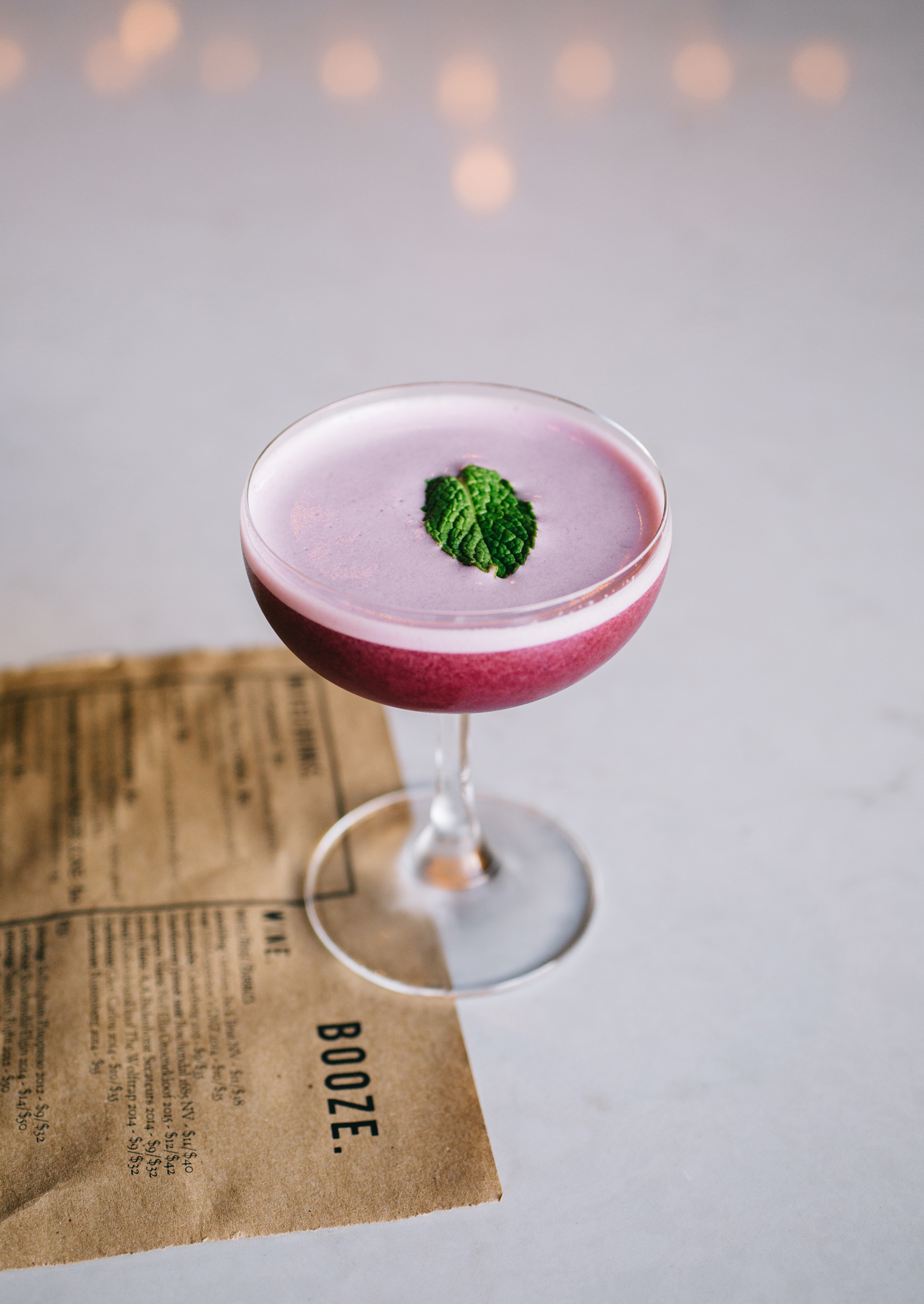 Spot you most frequent at PCM:
My buddies at Spiller Park Coffee save lives. Hey, Dale!
Now would ya look at that:
Meet Logan Saunders, Assistant Beverage Director at Biltong Bar in Ponce City Market. Beef jerky and booze? Yeah, we’re big fans of what’s going on at Biltong. I’ve yet to visit PCM and not stopped in to get a cocktail to go. 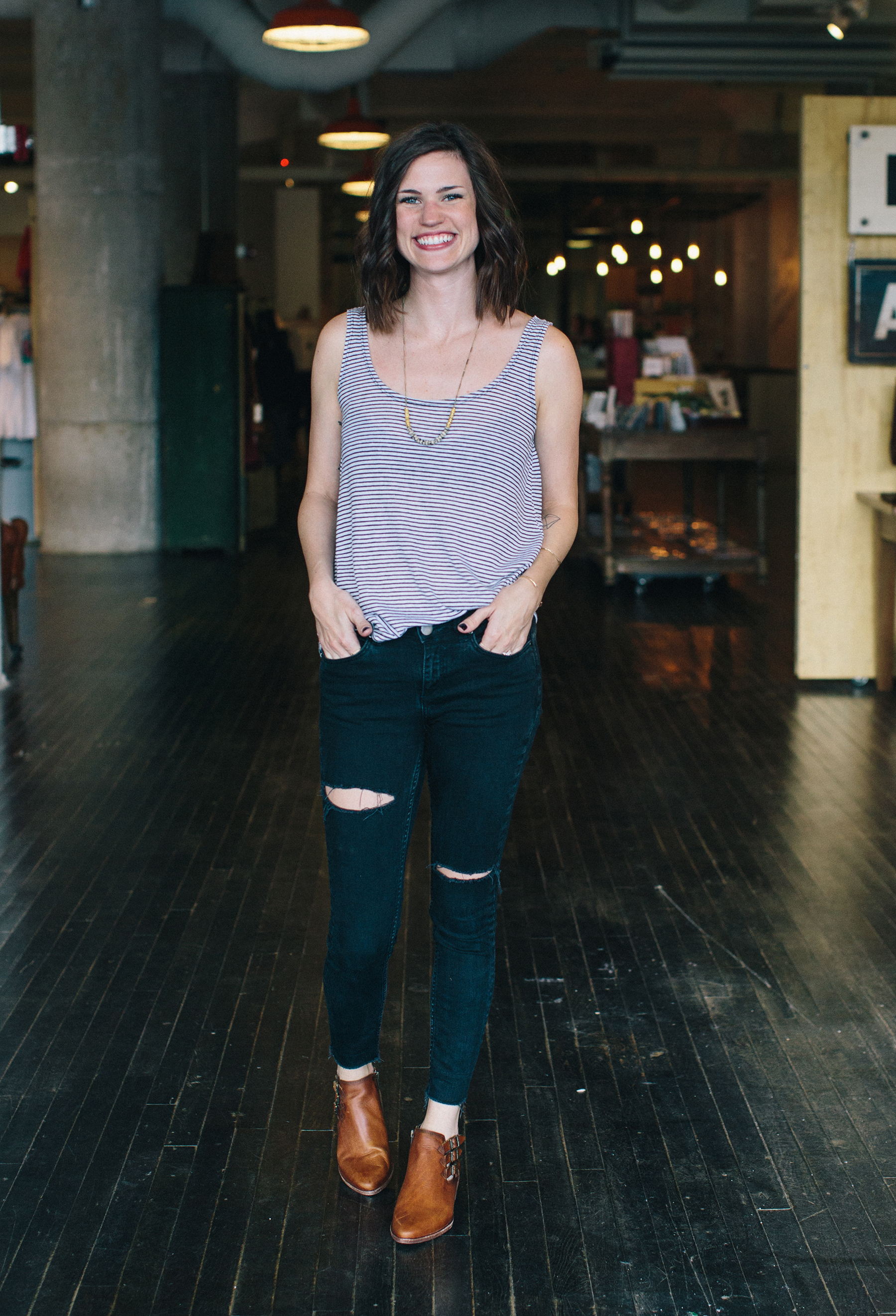 Photographed in Atlanta, GA
Raised in:
Dacula, Georgia
Lives in:
Raleigh, North Carolina (for a few more months, we’re a military family).
Describe Citizen Supply, in your own words:
We’re an artisan marketplace that focuses on telling the story of the maker and small business owner and providing a wide exposure at Ponce City Market. We curate handmade and sustainably made products and pride ourselves on working closely with the maker to pull together the perfect collection of pieces for the store, dream up a strong display plan, deliver detailed monthly reports, and promote community between the shopper and vendor. Beyond the details, though, it really is such a happy place to work, shop or just stroll around. The energy in the store when I’m there and interacting with our team and customers is something I miss when I’m away.
Maker(s) in the shop you’re obsessing over right now:
LOVING Zelma Rose and Chad Barela, and our new candle line by Brick + Mortar smells incredible!
Spot(s) you most frequent in PCM:
Spiller Park for my morning iced coffee, Minero for a taco lunch (and the best salsa in town), Lucky Lotus for an afternoon smoothie (Go Nuts is my fav!), and Madewell to tempt myself with one more pair of high-waisted skinnies.
Now would ya look at that:
Meet Mattie Tiegreen, Co-Owner and Creative Director of Citizen Supply. 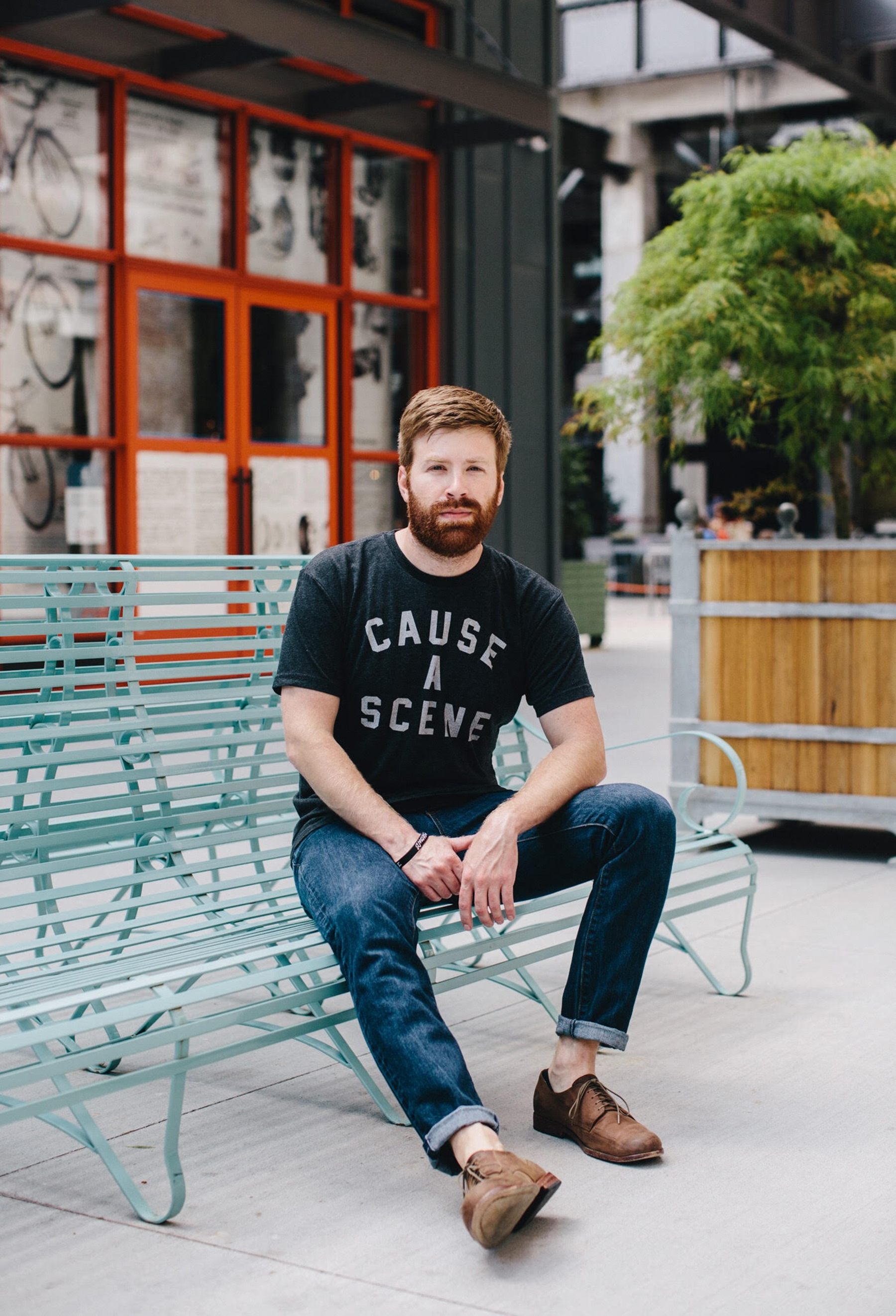 This is Larry’s fifth appearance (see previous) because we’re such a fans of what he’s doing with Cause a Scene. Currently on tour, I caught up with him briefly in Atlanta at Ponce City Market where their show was held at Citizen Supply.

Tell everyone about the Cause a Scene Tour:
The tour stretches over two months and 35+ shows in cities from coast to coast. It features two Salt Lake City-based singer-songwriters, Joshua James and Timmy The Teeth. It’s our first ever tour and in a sense is our attempt to plant seeds in various cities to see if the CAS concept can take root and consistently bring intimate pop-up concerts and events to those cities.

Highlight so far:
Each city brings its own level of excitement as we get to see old friends, meet new people, go to cities we’ve never been to before.

P.S. The August West Coast tour dates (including you, Texas!) were announced today. 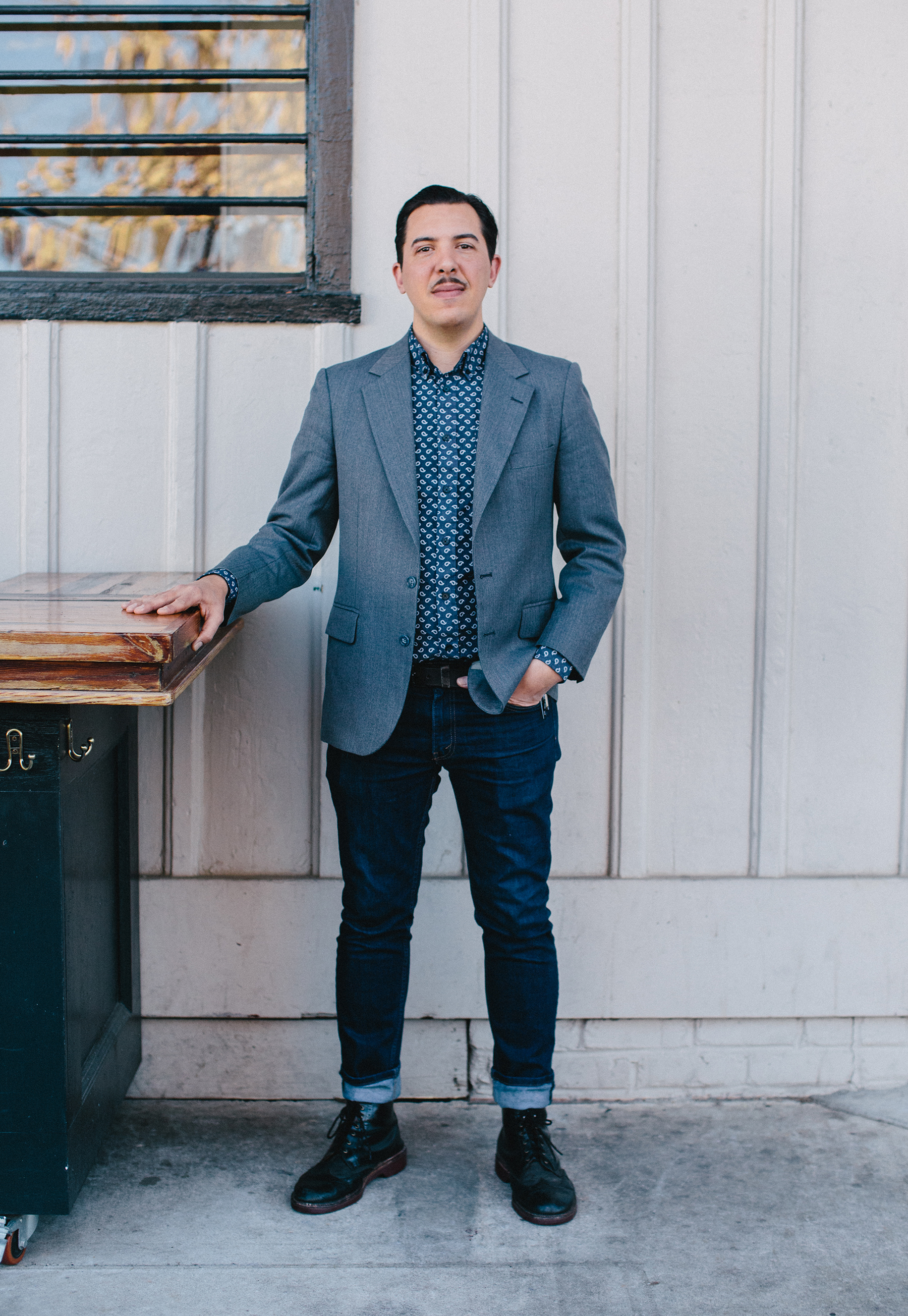 Favorite cocktail on your current menu at Kimball House:
Our 14th and current version of The Afternoon Delight. It’s Absinthe, watermelon, lime, lemon verbena from our garden and a vintage Cava with zero dosage. So bright, interesting and refreshing.

Go-to drink when not making it yourself:
Gin martini, preferably with a ratio of 3 parts gin, 1 part dry vermouth and a dash or two of orange bitters.

Now would ya look at that:
Meet Miles Macquarrie, co-owner and bar manager of Kimball House in Decatur, GA. For the record, this is hands down my favorite bar in the Atlanta area, so grabbing this quick photo of Miles was an exciting one for me to take. 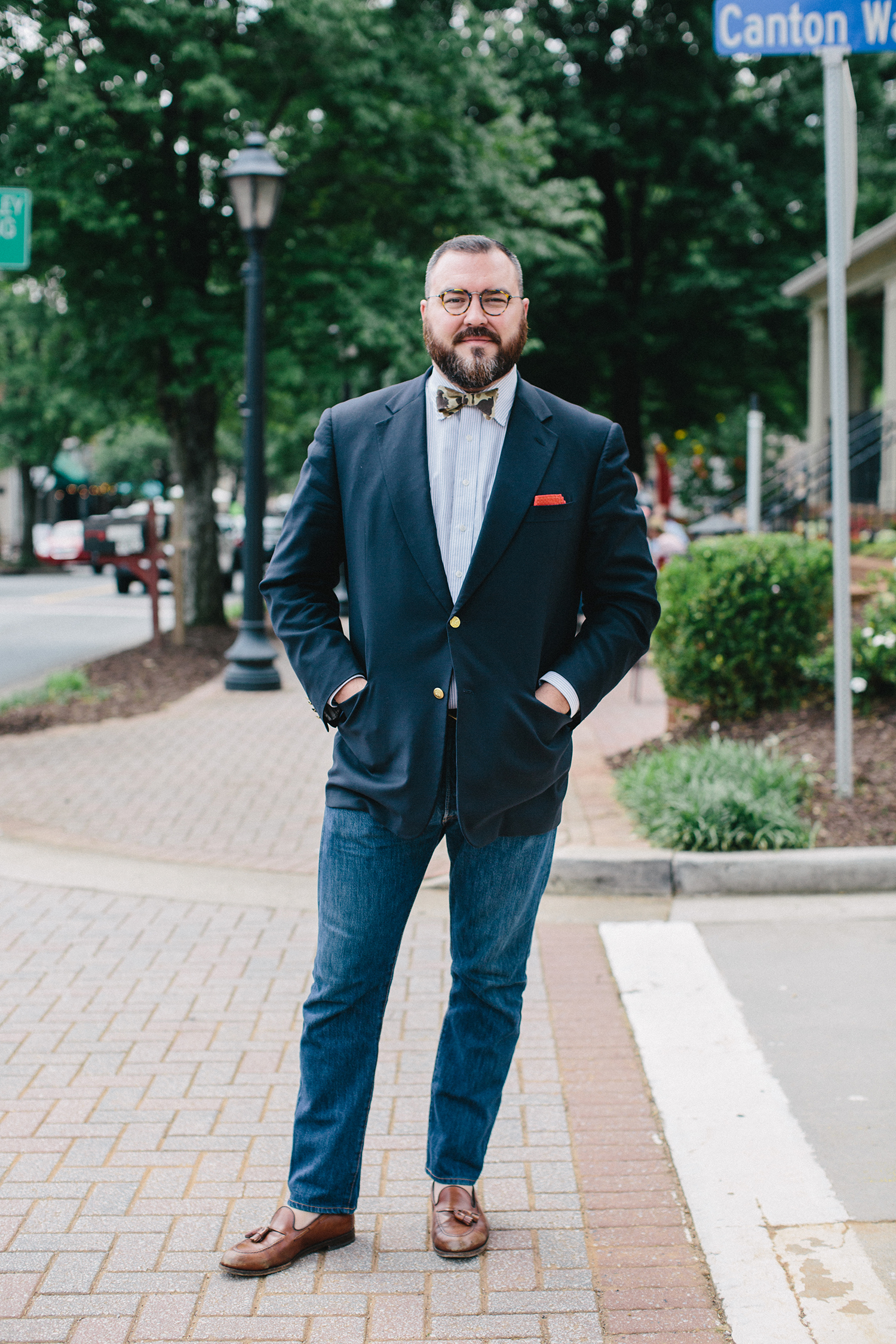 Raised in:
All over Georgia

Lives in:
Roswell, GeorgiaFavorite southern based company at the moment:
Sid & Ann Mashburn.

Tell everyone about American Field:
American Field is an experiential consumer marketplace that features premium American made products. Some of the brands and products you’ll see at AF include menswear, womenswear, skin care and grooming, home goods and outdoor gear. American Field is a consumer event so we’re open to the public and anyone and everyone is welcome. We believe the consumer is growing more and more aware and knowledgeable about what they buy so when they shop at American Field they can rest assured they’re buying the best in American Made goods.

Now would ya look at that:
Meet Ryan, Director of Events at American Field. He basically has my dream job and became an instant friend when we met for coffee at Roswell Provisions. He’s wonderfully genuine and kind and I’m thrilled to watch him soar in his new role with a great mission. The Pop-Up Market is heading down south to Atlanta and Nashville in November. 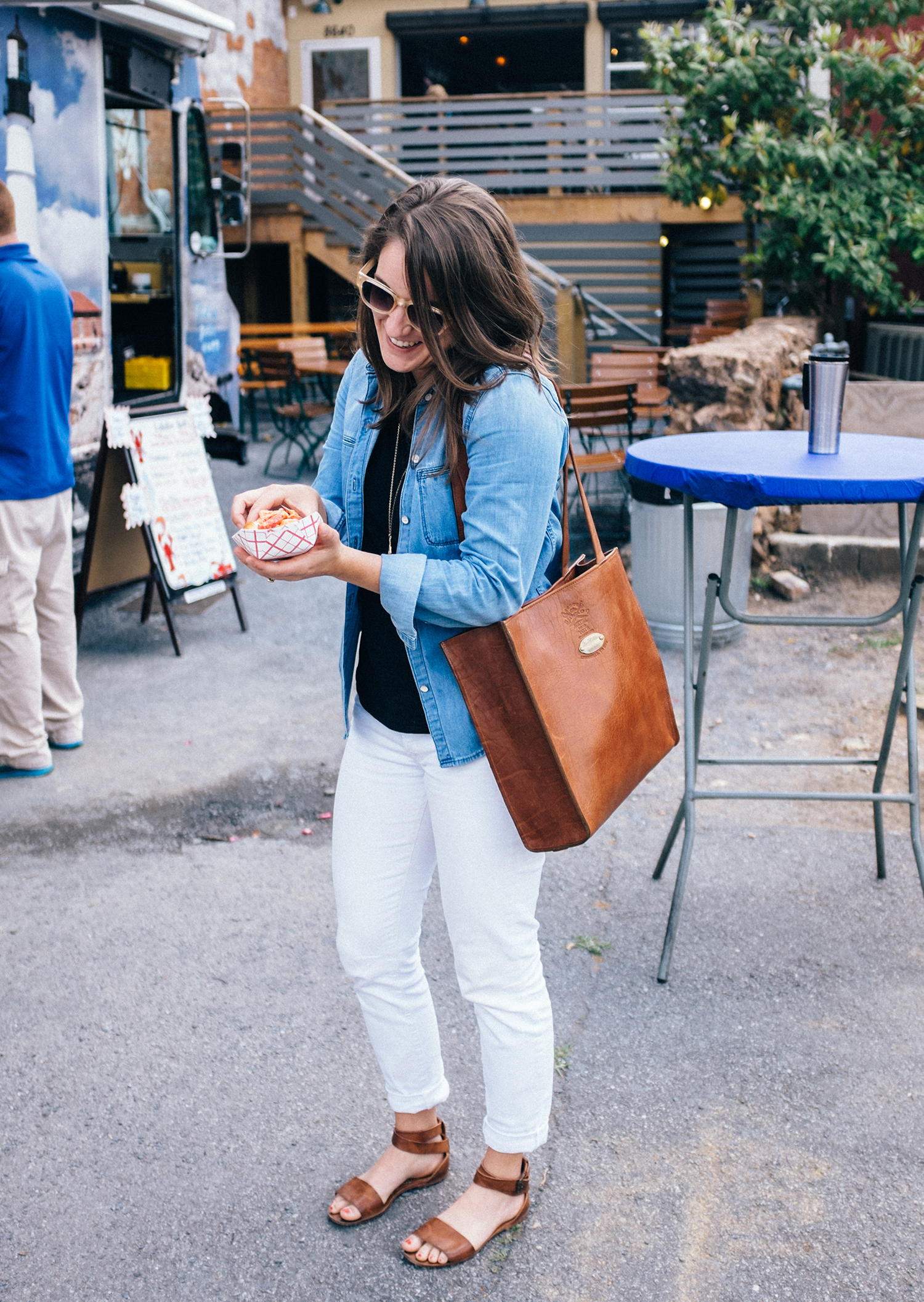 Biggest food surprise of the year (so far):
Killer lobster rolls in Woodstock, Georgia! Who knew? My buddy Anna (who snapped this photo) and I went to Truck & Tap for daytime beers and figured we’d grab a bite at whatever food truck was there. Tasting Maine? We were both hesitant but figured we’d give it a shot. Y’all, it was seriously fantastic. If you’re in the Atlanta area, check ’em out and try to cross their path for a roll. I went with a ‘picnic style’ roll and it was a great decision.

And now, our last post from the epic day of drinking through Athens last month (see Part I and Part II). It was the perfect finale at Seabear with Hunt Revell, leader of the Bar Team. We posted up at the bar and wound down with beach vibes, my favorite Negroni Slushy (okay, fine, I had 2 of them), mini lobster rolls and a Manchester United game on (go Red Devils)!

How you landed at Seabear:
I worked at 5&10 out of college, bussing tables, expo-ing, serving, and finally bartending. Then I helped open The National in 2007 as a bartender. After that, I moved to New York for a few years. When I came back to Athens, I was back at The National and eventually took over the bar at Seabear last year after a few people moved on.

Favorite cocktail on your current menu:
Probably the Fish House Punch. It’s an old-style drink, coming out of Philadelphia as early as the mid-18th century but popular during most of the 19th. Our version includes green tea with the usual dark rum, cognac, peach brandy. Add fresh citrus, sugar, and sparkling wine, and the party is on! 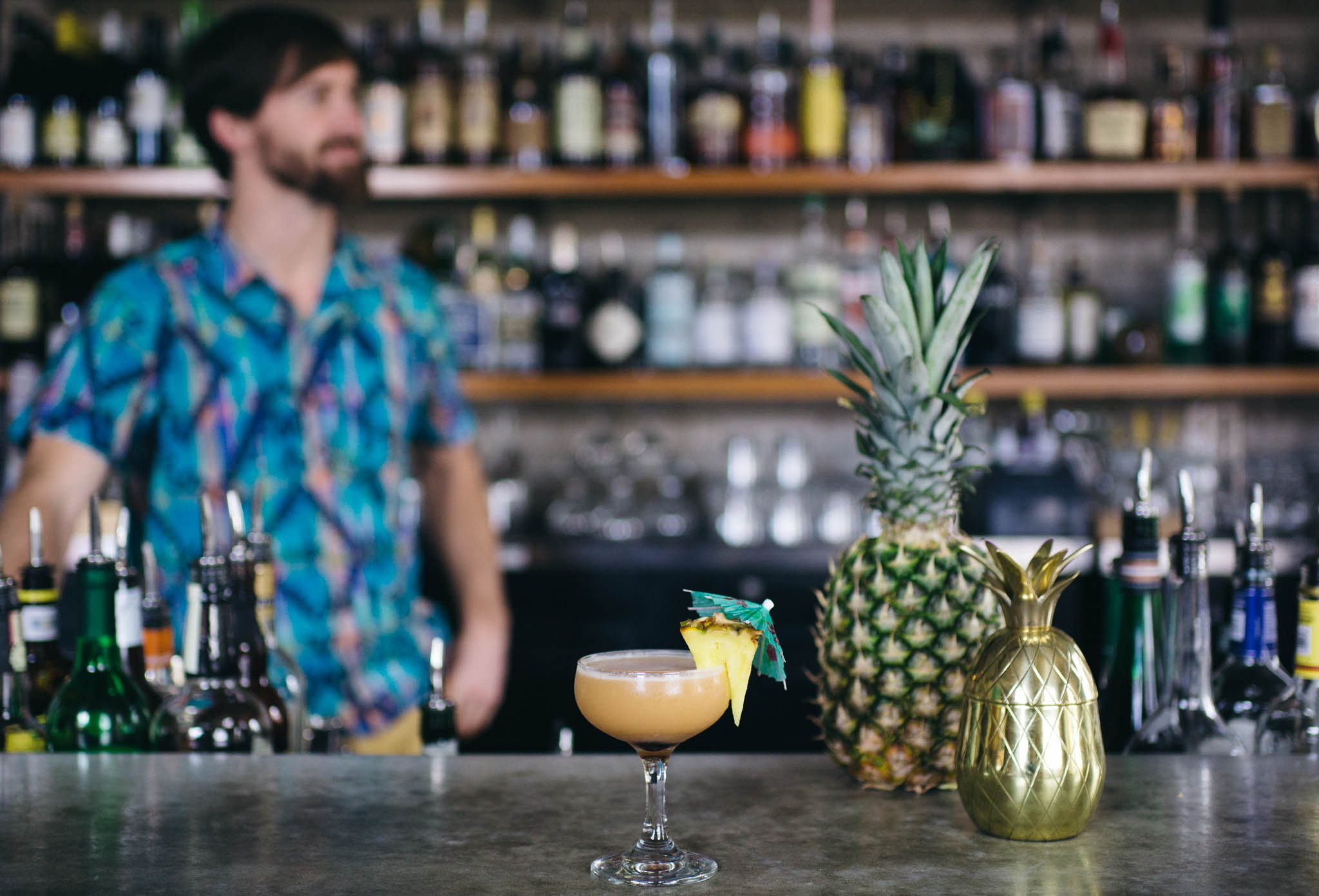 I found the basis for the recipe in a down-the-rabbit-hole search for old Tiki cocktails (we do a Tiki Night and in general run a rum-heavy, beach party-vibe bar as much as possible). I’d been making some house coconut rum because most of the stuff you can buy is just too sweet and syrupy, and I wanted to find a drink to use it on. The drink I found was called “The Professor” and was apparently named for the Professor on Gilligan’s Island (which I think is awesome). It was equal parts coconut rum, white rum, banana liqueur (which we also make in house) and orgeat. We tweak it by adding toasted pecans to the usually almond-heavy orgeat, and I altered the name to reflect one of my favorite stories about a raving genius who roamed the Bowery of New York and claimed to understand the language of seagulls, a story written by Joseph Mitchell called “Professor Seagull”. I highly recommend the story, and the drink isn’t bad either.

Note: get that sexy pineapple tumbler on Huckberry. 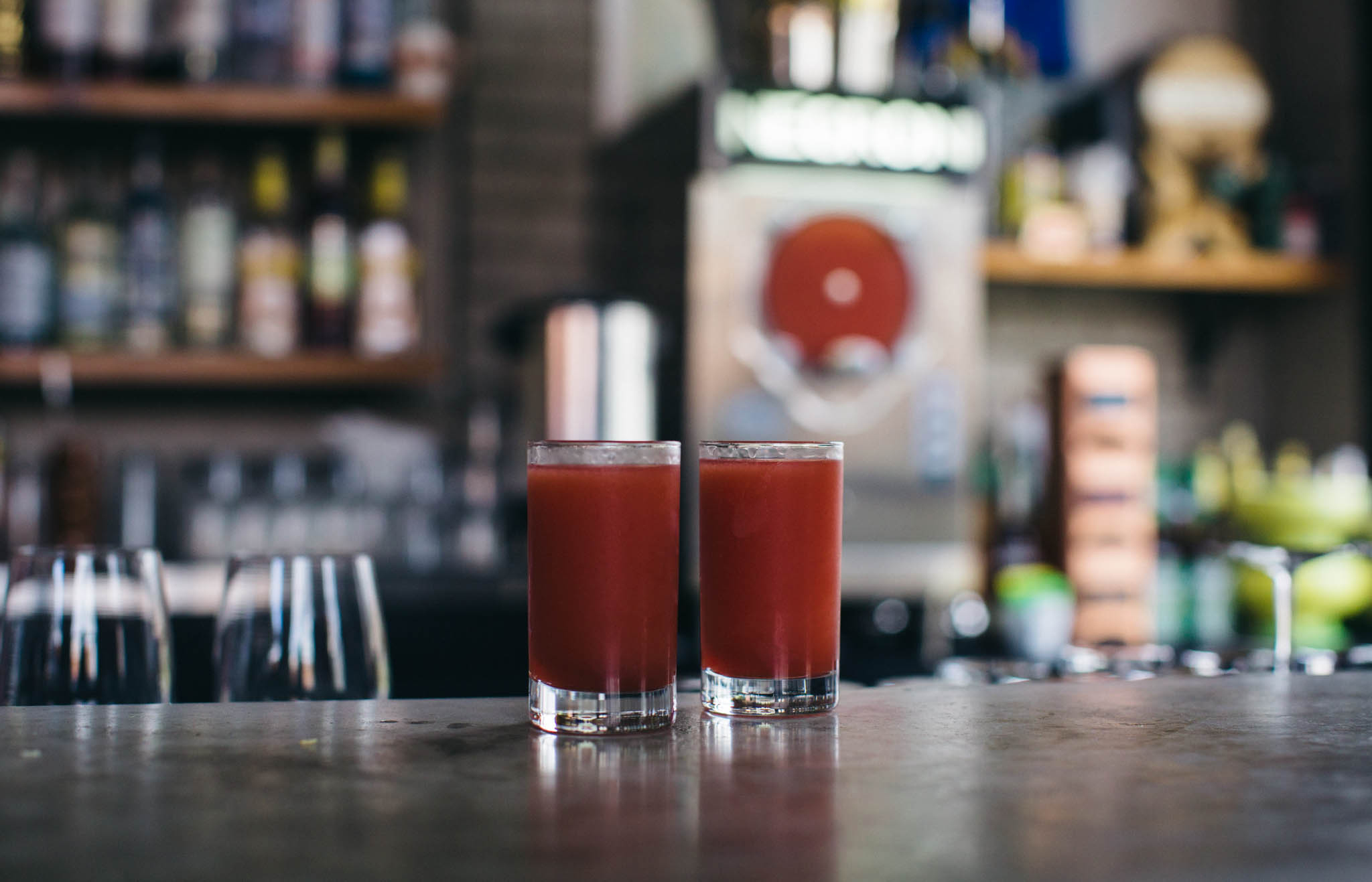 Negroni Slushy:
Since a Negroni is normally straight alcohol (equal parts gin, sweet vermouth, and campari), we had to add a little sugar to make it freeze.  We do this with orange juice (orange peel being a common garnish for Negroni) and a little simple syrup.  It’s so bitter and refreshing and it kind of has a cult following here in Athens. 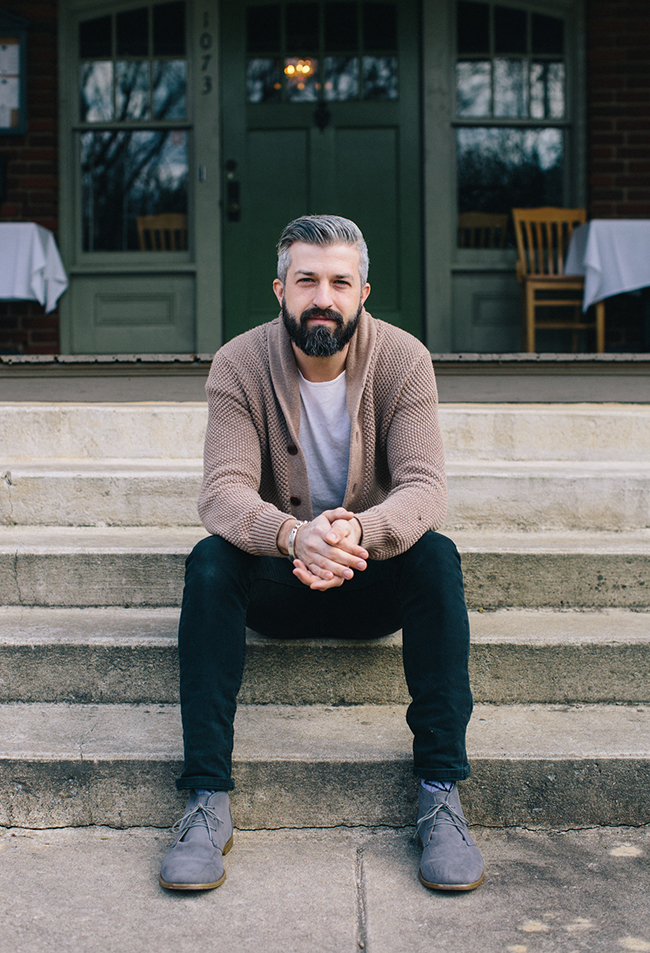 How you landed at 5 & 10:
This is my second stint here. I began as a part-time busser, then a host, then a waiter. Then, seemingly out of nowhere they put me on as an expediter – which was pretty crazy. However, that got me in the kitchen which unlocked a whole new world for me.  I began coming in off the clock to learn how to cook and eventually asked the executive to work full-time in the kitchen. I learned all the stations and eventually was a bit of a junior sous chef. I left a year or so later to pursue restaurant work in New York only to return a year later. I worked at Seabear for a while and then moved back to 5 & 10 this past September. 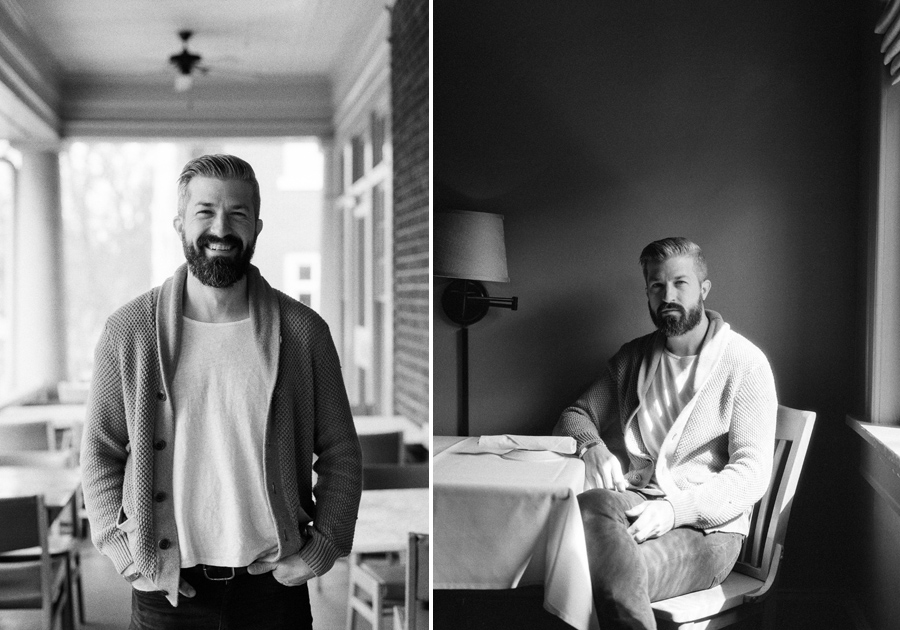 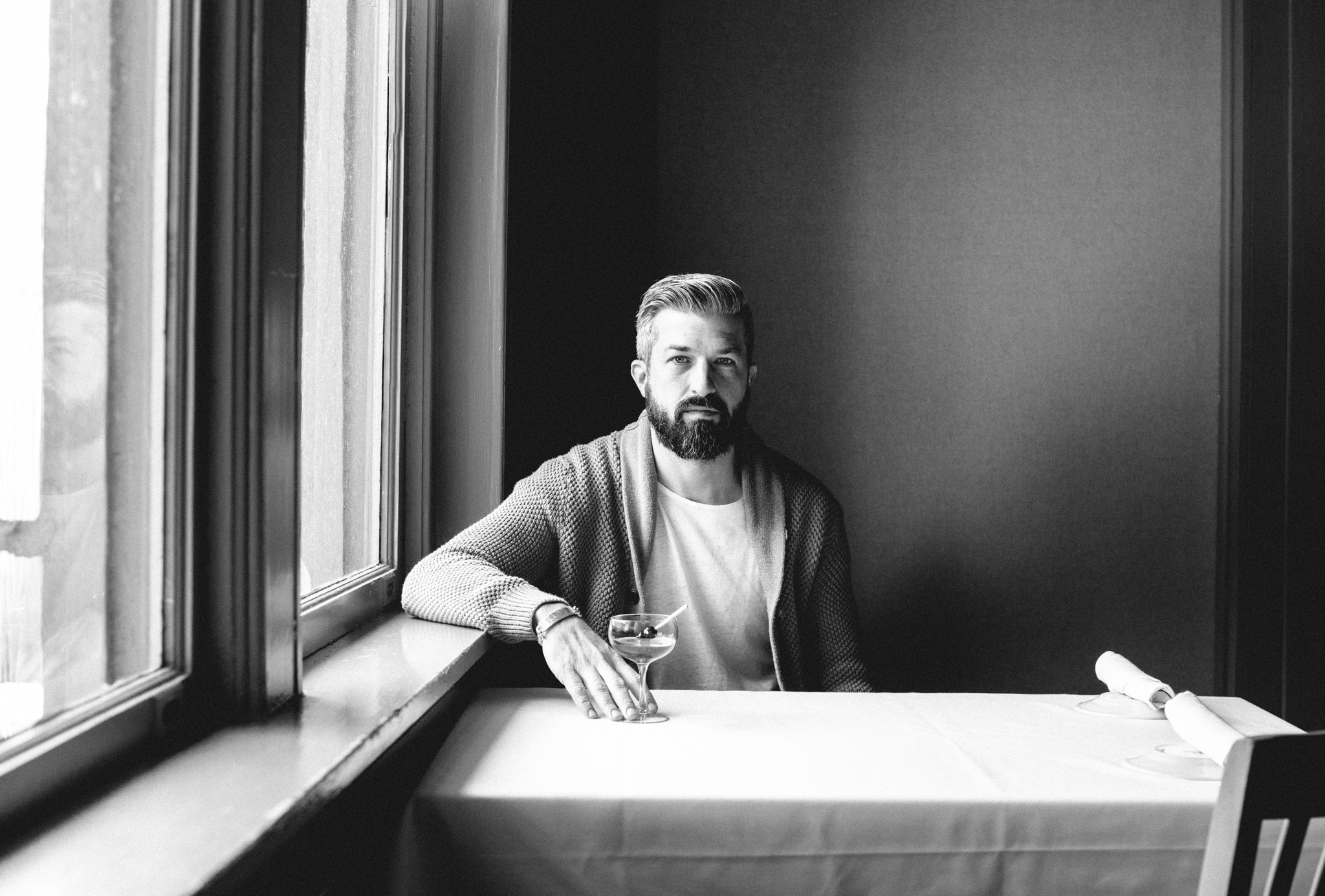 Your go-to beer order:
Anything from Creature Comforts. Those men and women are inspirational and their beer is fantastic. I’ll never turn down a Mexican lager, either. 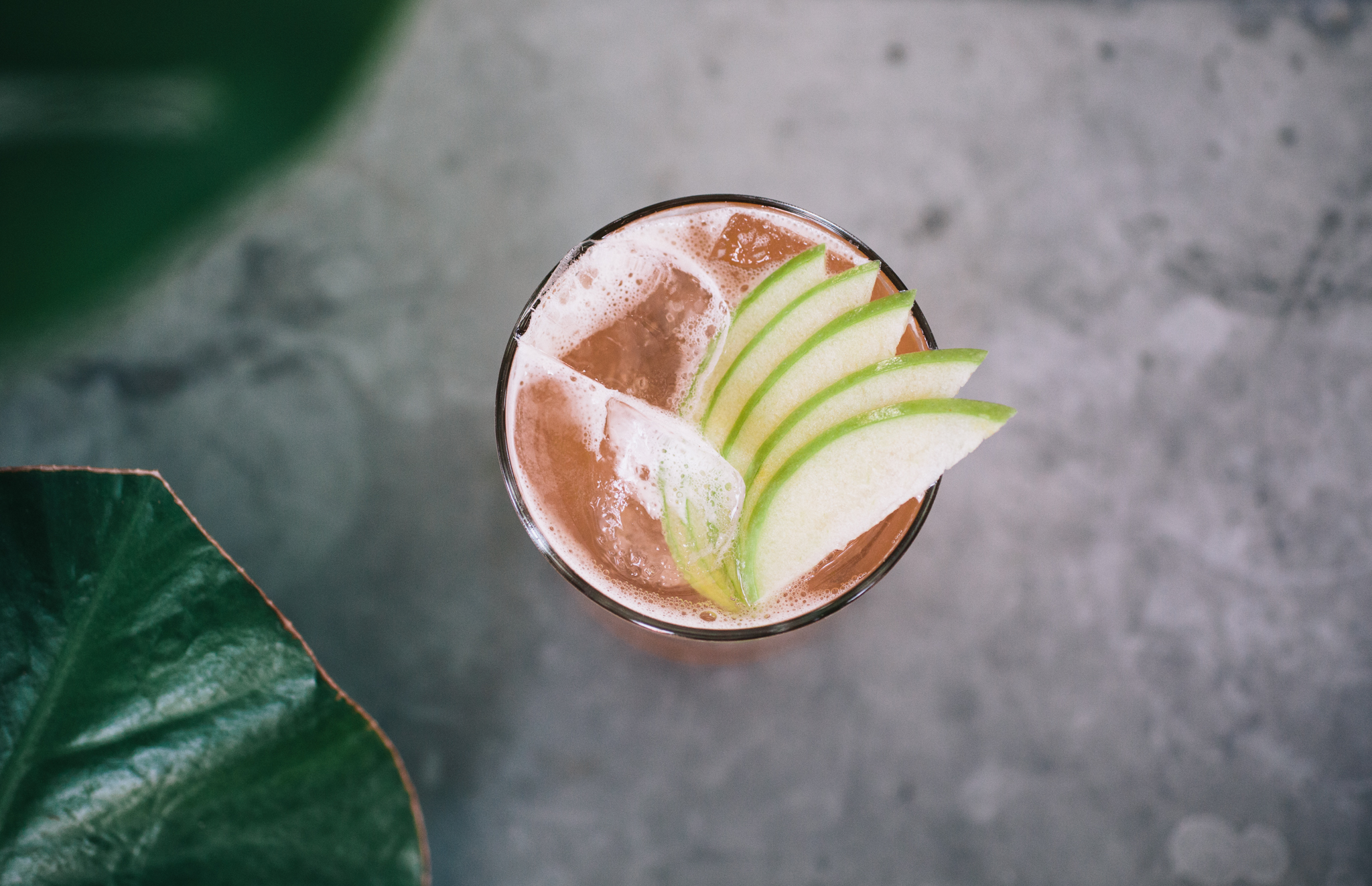 Moonlight Through the Pines:
I knew I wanted a refreshing rye cocktail on the menu. The pastry department had some really nice Honeycrisp apples so I immediately thought to put the two together. I think it really found it’s identity once I added some Zirbenz Stone Pine Liqueur.  All that was left to do was to brighten in up so I added lemon juice for freshness and Dolin to calm the heat of the rye. People drink through this one pretty quickly.

In a shaker, muddle a few apple chunks with lemon and simple syrup.
Add the rest of the ingredients.
Shake for just a few seconds and strain into a double rocks glass and fill with ice.
Garnish with a few thin apple slices. 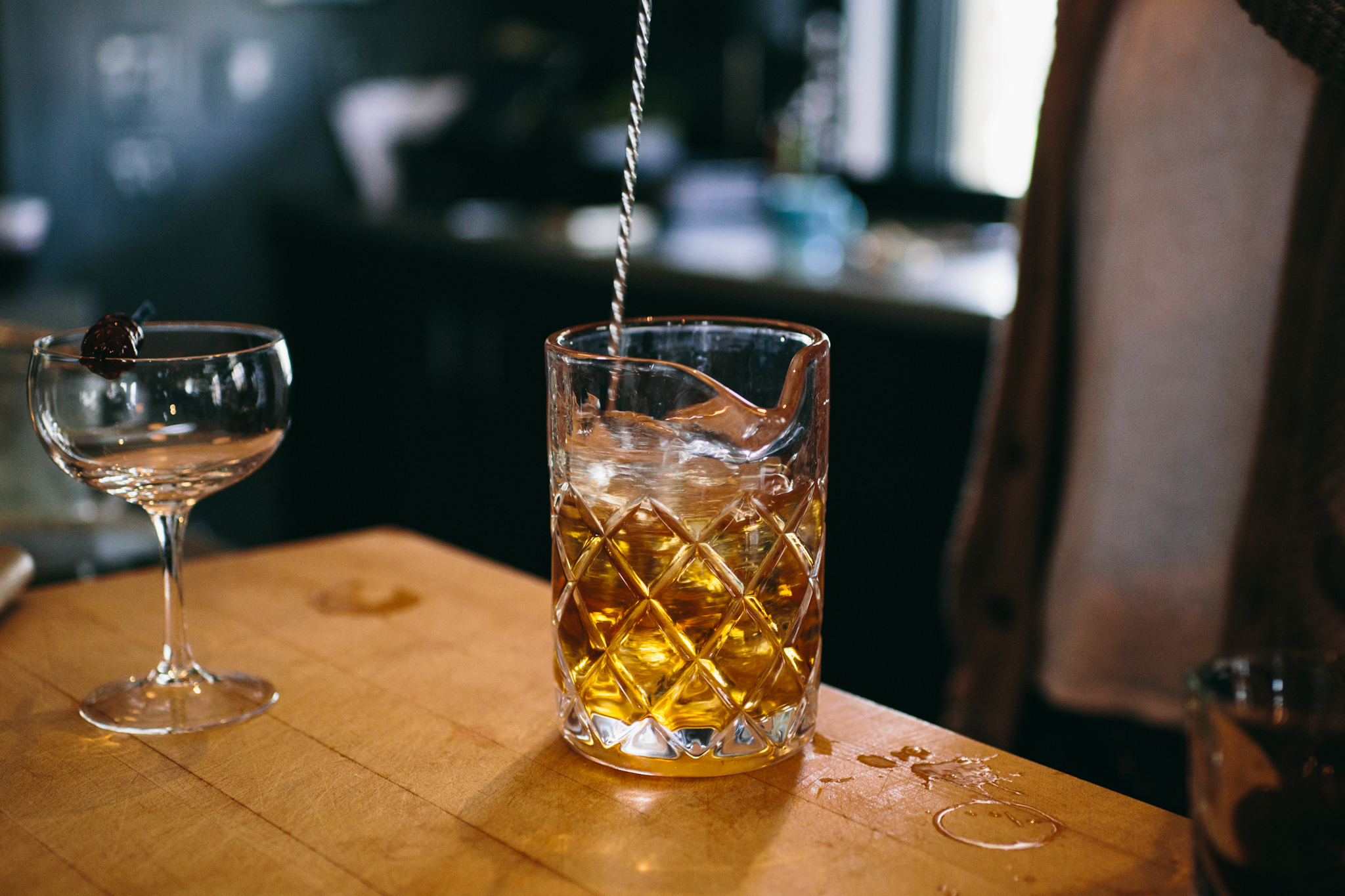 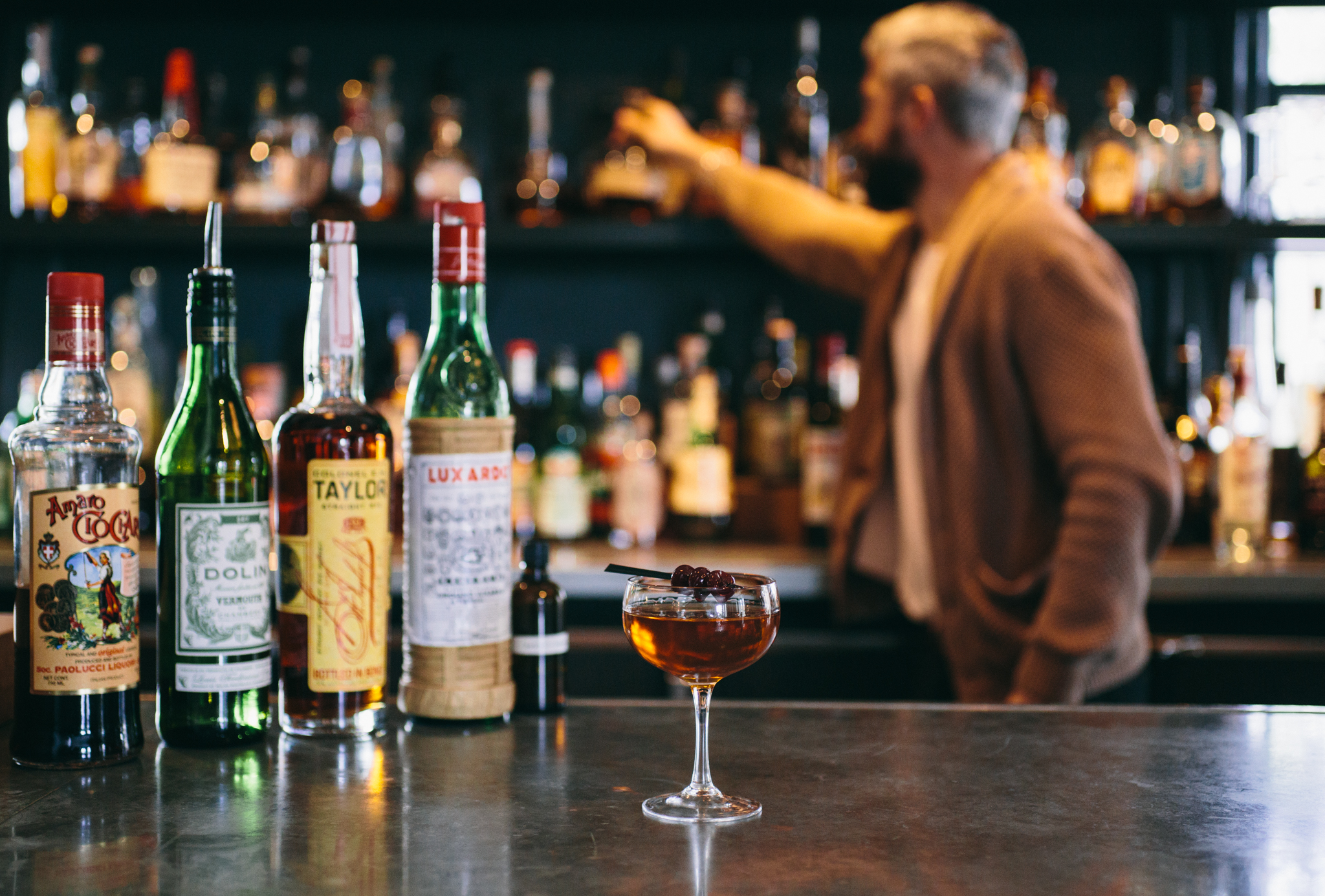 The Nostrand A:
This is named after the Subway stop closest to my apartment when we lived in Brooklyn. It’s basically a classic Brooklyn with a few small modifications. First, a true Brooklyn uses Amer Picon, which is all but impossible to find in the states. I substitute Amaro Montenegro or Amaro CioCiaro. Second, I add orange bitters. Matt McFerron over at Old Pal makes amazing bitters so I’m using those. He calls them Buster’s Bitters. The only other difference is that I change up the ratio slightly.
1.5 oz Bonded Rye (Rittenhouse or Col. E.H. Taylor does the trick)
3/4 oz Dolin Dry Vermouth
1/4 oz Amaro CioCiaro
1/4 oz Luxardo Maraschino Liqueur
4 dashes orange bitters
Stir with ice for 20 seconds, or as long as it takes you to sing the chorus to Taylor Swift’s “Shake it Off.” Strain into a chilled cocktail coupe and garnish with brandied cherries.
Page 2 of 34
« Previous 1 2 3 4 … 34 Next »
« Previous Page
Next Page »